Cryogenics is defined as the branch of physics which deals with the production of very low temperatures and their effects on the matter but more generally, cryogenics is the science and its application to physical phenomena ocurring below 120 K (-153°C). This temperature of 120 K represents the limit where main atmospheric gases begins to liquefy (methan, oxygen, argon, nitrogen, argon, neon, hydrogen and helium).

Cryogenics represents one of the biggest challenges of the particle accelerator LHC (Large Hadron Collider). The LHC is composed of 1700 Nb-Ti superconducting magnets which have to be maintained at 1.9K (-271.25 C) along the 27km of the string. To achieve this challenge, the only solution was to use helium superfluid as cryogenic fluid because of its unique thermal transport and viscosity properties. CERN cryogenic facilities are using helium-4 (4He) and nitrogen (N) as cryogenic fluids. Nitrogen is only used for pre-cooling processes and thermal shielding because of its ease of use and its wide availability whereas all other cryogenic systems exploit 4He under different states. The two main particle detectors (CMS and ATLAS) are also using superconducting coils operating at 4.5K. To cooldown and maintain superconductivity in different magnets, helium refrigeration units are used . 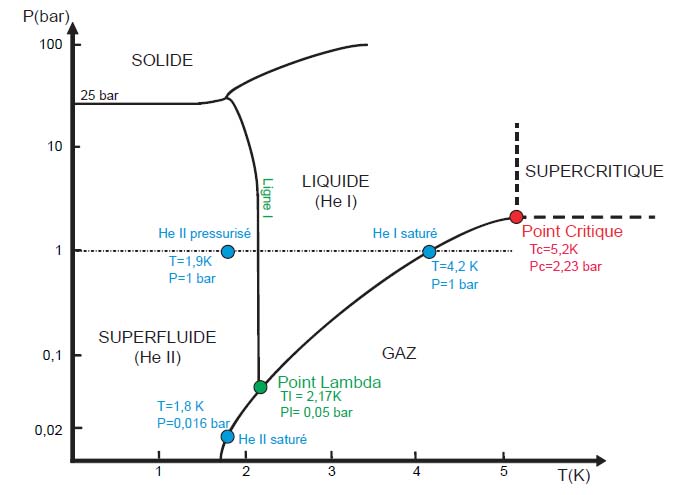