CMS (Compact Muon Solenoid) is a CERN experiment of the LHC particle accelerator. It is the heaviest particle detector of CERN with its 12500 tonnes. It is 21 metres long and 16 metres diameter and situated at 100m underground close to the border between Geneva and France.

CMS has a large solenoid magnet in order to deviate charged particles. Hence, the ratio charge/mass can be deduced from the curved track of particles in the magnetic field. This magnet consists of a 4-T central field, 6-m free bore, and 12.5-m length, superconducting solenoid, enclosed in an iron yoke, which is also used for muon detection. It is the biggest and most powerful superconducting magnet ever built, with an inductance of 14 Henries and a nominal current of 19500 Amps, giving a total stored energy of 2.7 GJ (equivalent to about half-a-tonne of TNT). The magnet is composed of five module coil using aluminum-stabilized as conductor. Each coil is indirectly cooled at 4.5K by a thermosiphon mode.

The first test setup for this cryogenic simulator is based on the CMS refrigerator, where the superconducting coil has to be maintained at 4.45K.


A coldbox provided by Air-Liquide allows to cooldown helium from 300K until 4.45K at 1.25 bar. The cold box has a cooling capacity of 900W at 4.45K for the magnet, 4.5kW between 60K and 80K for the thermal shield of the screens and 4 g/s liquefaction for the current leads simultaneously. The cooling scheme of the refrigerator is based on a Claude cycle where 6 heat-exchangers, 3 expansion-turbines, cryogenic valves and one phase separator are used. A nitrogen precooler can also be used to start the cooldown until 100K.

A Coil Cryogenic System situated above the magnet allows the helium supply of the coil. It is composed of a phase separator of 900l connected to cooling sub-circuits via a chimney. The helium flow is driven by a natural thermosyphon principle. 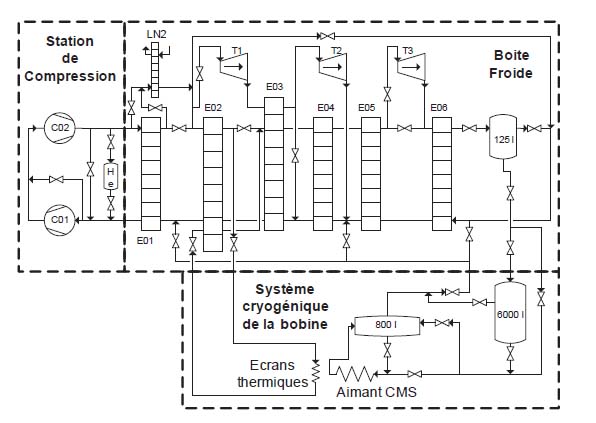 The CMS coldbox and the Coil Cryogenic System


The complete model of the coldbox connected to the Coil Cryogenic System including the superconducting magnet is composed of 3943 algebraic-differential equations. The simulation is performed on a Pentium D 3.4 GHz with 1GB of RAM. In simulation, the complete cooldown of the superconducting magnet from 300K until 5K is performed in 3 days of computation time, hence the simulator ran 7.5 times faster than the real process in average. The simulated cooldown duration is coherent with the observed one (23 days) and the transients of the systems are well simulated.